"I really like to play football. It’s tough and it’s hard and no pro football owners can pay a player enough for the punishment they take. You just have to like it—and I do.” 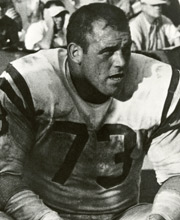 To many of his opponents, it must have seemed that Leo Nomellini was around an awfully long time. He was, too, for he didn't miss a game for the San Francisco 49ers from the day they first played in the NFL in 1950 until after the 1963 campaign, 14 long years later.

Leo played in 174 straight regular-season games and counting all appearances, including 10 Pro Bowl games, he played in 266 pro contests. Nomellini was an All-America tackle for two years at Minnesota and the number one draft choice of the 49ers in 1950.

The choice of Nomellini proved to be a superb one. At 6-3 and 260, "The Lion” had everything needed to be an all-time pro great – size, speed, agility, aggressiveness, dedication to the game, superb conditioning and the willingness to go the full 60 minutes of any game.

The status as an all-time pro grid great is a far cry from the impoverished days Leo knew as a youth. Born in Lucca, Italy, in 1924, Nomellini came to Chicago as an infant. Because he had to work to help support his family, Leo had to pass up high school football. So the first game he ever saw was one he played in, as a member of the Cherry Point, N.C., Marines team.

Later, at Minnesota, he was a starter in the first college game he ever saw. Freshmen were eligible then and it was the start of a brilliant four-year college career. Like a fine old wine, Leo improved with age during his long term with the 49ers. When he finally retired at 39 after 14 years of battering the enemy, Nomellini had been tagged "indestructible." It was a tag he had truly earned and appreciated.

Thank you very much for your kind words. Before speaking for a few seconds, I once again want to express my gratitude to each and every one and Canton for your hospitality. I've enjoyed my three days here and I'm looking forward to coming back to your lovely city. In the year 1950, The San Francisco 49ers enter the National Football League and our first draft choice was, Leo the Lion Nomellini, a two-time All-American tackle from the University of Minnesota. It turned out to be a superb choice. Leo the Lion became one of the few players ever to be named to an All-National Football League team on both offensive and defensive platoons. She was an offensive tackle choice in the year 1951 and also in ‘52, and then won defensive team honors four other seasons. He played in 10 Pro Bowl games. Leo Nomellini had everything needed in all-time great size, speed, agility, aggressiveness, and perhaps most important, dedication to the game. Always in superb condition, Leo was willing to play all 60 minutes and he often did. His career is even more remarkable and that he did not play high school football. His first football experience came in the United States Marine Corp., and the first college game he ever played, he was a starting guard for the Minnesota Golden Gophers. Leo quickly learned to use his great talents to the best advantage, and this weekend's honor is testimony to just how superbly he played the game period in playing 174 consecutive regular season games and counting preseason and postseason games. 266 pro-contests in all, Leo rightfully earned the tag indestructible. And now with Pro Football Hall of Fame enshrinement, one more word can appropriately be added unforgettable - I present Leo Nomellini.

Believe me, my appearance up here will be rather brief. But these honors that come to us, to we players after we’ve retired are really more appreciated, especially in honors such as the Hall of Fame. Canton, Ohio is thousands of miles from Luca, Italy the place where I was born, but Canton, Ohio and the Hall of Fame here are – (lost for words here a little bit) - Is living proof of what opportunity and sportsmanship in America really are. I would like at this time to recognize my school, the University of Minnesota, and the coach for whom I played, Mr. Bernie Beerman. And it really overwhelms me to realize that the only other Hall of Famer from the University of Minnesota in the Hall happens to be, my good friend, Bronko Nagurski. I mentioned previously that I was born in Italy, and I think it's ironical in a way that the Morabito brothers, who founded the San Francisco 49ers and who were the only man I played professional football for were also the sons of Italian immigrants. With this in mind, I'm especially grateful to Mrs. Jane Morabito, the widow one of those brothers, who's my official presenter today thank you very much.