The incredible saga of the Green Bay Packers began in August 1919, when the Indian Packing Company agreed to sponsor a local pro football team under the direction of Earl (Curly) Lambeau. In 1921, the Packers were granted a membership in the new National Football League.

Today, they rank as the third oldest team in pro football. The long and storied history of the Green Bay team is one of struggle, until comparatively recent, for financial survival off the field and playing stability on the field. The Packers' record has been punctuated with periods of both the highest success and the deepest depths of defeat. 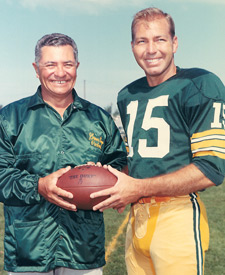 Many great football players have performed for the Green Bay team but two coaches, Lambeau and Vince Lombardi, rank as the most dominant figures in the Packers' epic. Between the two, Lambeau and Lombardi brought the Packers 11 NFL championships, including two record strings of three straight titles, the first in 1929, 1930 and 1931 and the second in 1965, 1966 and 1967. Those last three championships completed the Packers' dynasty years in the 1960s, which began with Green Bay also winning NFL championships in 1961 and 1962. During the late 1930s and early 1940s, the Lambeau-led Packers were annual championship contenders. They won four divisional crowns and NFL titles in 1936, 1939 and 1944.

Green Bay, home of the Packers, is still a city of less than 100,000 and is viewed as sort of a sports "dinosaur" as the only remaining small city in the big-city world of major league professional sports franchises. Green Bay is unique in another way -- the team is the only community-owned non-profit organization in the NFL. From 1937-1994 the Packers played their home games in two cities. Five of their eight home games were played in Green Bay's Lambeau Field and the remaining three at Milwaukee County Stadium in Milwaukee. Today the Packers play exclusively in Lambeau Field.

The Packers first played on a couple of small fields in Green Bay and then in 6,000-seat City Stadium beginning in 1925. Eventually, the City Stadium capacity reached 25,000. On September 29, 1957, the Packers dedicated a modern $1,000,000 stadium with a 32,150-seat capacity. Subsequent expansions and renovations have brought the Green Bay facility, officially named Lambeau Field in 1965, to its current capacity.

Off the field, the Packers remain a financially sound, competitive and historically rich franchise. On the field the glory years are back. In 1996, the Packers returned to the top of the pro football world when they won Super Bowl XXXI. Green Bay won the Super Bowl for a fourth time in 2010 when the Packers defeated the Pittsburgh Steelers in Super Bowl XLV.