"The toughest part of it all is not the physical punishment you take, but rather it’s the constant fatigue you must fight off. You drain yourself on every play, pushing and pushing yourself. Your body is conditioned to absorb the knocks, but no matter what shape you’re in, there are many factors that tend to tire you out. If someone hits me a good lick, chances are good I won’t even feel it until the next day. But you don’t realize how much it takes out of man when he tries to hand-wrestle or throw a 250-pount lineman?” 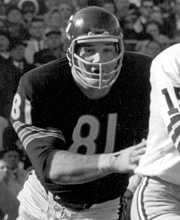 Doug Atkins originally went to the University of Tennessee on a basketball scholarship, but once Gen. Robert R. Neyland, the football coach, saw his combination of size and agility, he was recruited for the grid team. After he earned All-America honors, the Cleveland Browns selected him as their first choice in the 1953 National Football League Draft.

After two seasons in Cleveland, he was traded to the Chicago Bears and there he developed into one of history's most awesome defensive performers. Exceptionally strong and agile, the 6-8, 257-pound Atkins earned legendary acclaim as a devastating pass rusher who would often leapfrog blockers to get at the passer. That was a skill that carried over from his collegiate days when he won the Southeastern Conference high jump title.

An All-NFL choice four times and a veteran of eight Pro Bowls, Atkins wound up his career with three successful seasons with the New Orleans Saints. For 17 years and 205 games, Doug wrecked absolute havoc on opposing linemen, quarterbacks, and ball carriers. Linemen who faced Atkins usually had just one thought in mind: “Don’t make him mad.” It was common knowledge among players that as tough as Doug was, he was even tougher when angered. An outspoken free spirit, Doug often clashed with the Bears’ fiery head coach George Halas. Atkins’ easy-going approach to practice particularly annoyed the coach.

But still, the two developed a mutual respect. Although their relationship was at times tumultuous, it lasted for 12 seasons and Atkins was a key part of the great Bears defense that won the league championship in 1963. However, in 1967 Atkins demanded to be traded and Halas sent his star lineman to the Saints, where he finished his career. After Atkins finally retired following the 1969 season, Halas openly admitted, “There never was a better defensive end.” 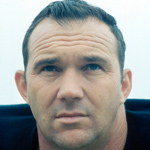 Doug Atkins:
Thank you Ed (presenter Ed McCaskey). I just wish I would have talked contract with you instead of Mr. Halas. I think we would have gotten along just fine.

Ladies and gentlemen, members of the press, radio, TV, clergy, and the wonderful people of Canton and the members of the Hall of Fame who have worked so hard on this affair. It is kind of hard to describe what this week was like. I didn't realize that there were so many people around here until I got into the parade today. I have never seen so many people in all my life and I really enjoyed it. You people in Canton have been wonderful and of all my years in professional and college ball, this is probably the most memorable time of my career. I played for 17 years in the NFL, high school four in Humboldt, Tennessee and at the University of Tennessee and I don't believe I have ever witnessed anything like this afternoon and this week. 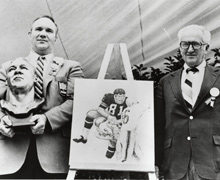 Football has been good to me. It has been my life. And what is so good about it is when you travel through the country you meet so many of the players that you have played with in the past. Like this week, I have met so many of the old timers that you played with either on your team or against that you have respected over the years. And I didn't realize what I was getting into when I got here. I thought it was just another little old affair. But it is really something and unless you are here, there is no way to tell anyone the feeling you get when you drive down the road in the car and listen to people cheering you block after block.

Football has been good to me. I have enjoyed lots of it and some I haven't enjoyed so much. Of course, Coach Halas has kept my spirits up and aggravated me every once and awhile. One time the coach and I were talking about contracts and we were talking about a matter of $500 and we got into a pretty heated argument. Coach Halas said, 'if I give you that money you would only spend it.' I said, 'Coach, that is what I want it for.'

Well, I have enjoyed it and really I guess even the game as tough as it is, I have enjoyed my two years with Cleveland. My first year with Cleveland, I couldn't do any wrong, the second year. I couldn't do any right. But I had a little injury and I guess Coach Brown thought I was through. Not only did he think I was through, I thought I was through also. Then I got traded to
Chicago and I enjoyed those 12 years; I enjoyed all those years. And then one time the coach called me on the phone and said, 'Doug I hear you are not happy with our team and that you want to be traded.' I said "Coach that is fine." He said he would call and see it anybody wanted me and would call me back. Later he called me back and said 'Doug, I traded you to New Orleans.' I said 'Coach, thank you.' And I enjoyed three years with the Saints organization and they are fine people with fine fans. The same as Cleveland and Chicago. And all my seventeen years have been great.

Like you say, the good offsets the bad. Of course, I have a few injuries like all the rest of the old football players and you can see them hobbling down the halls and they can't get up and they can't walk. But really to be selected to a group like this, it makes all those things worthwhile.

Of course, you could go and thank people for helping you. I had lots of help in football. There has been so much help that I have had in the 25 years that I have played college and high school, it would be very hard to single out individuals because you are going to leave someone out. So I want to thank everyone who has been part of my football career that counts. Players, coaches, fans, acquaintances, and everyone. I have a friend who wanted to attend this affair, but due to sickness he was unable to make it. He is having a terrific battle with cancer. I would like to say hello to Doug Bigham in Atlanta, Georgia at this time. And folks I have enjoyed it and thank you.