Hank Williams Jr. has been singing the intro to Monday Night Football since 1989. That same year the Detroit Lions selected a Heisman Trophy winning running back out of Oklahoma State with the third overall pick in the first round.

And now that Hank is out and no longer asking the world “Are you ready for some football?” ESPN is out to find something new to feature as the preview. What better person to welcome Detroit back to MNF after a nine-year absence than that very same third overall pick of the 1989 NFL Draft, Hall of Famer Barry Sanders.

The league’s third ranked all-time leading rusher probably won’t be bringing down the house with his vocals. But, he has confirmed his appearance through Twitter stating, “Ok, I admit it, I will be at MNF this week and doing the intro.” 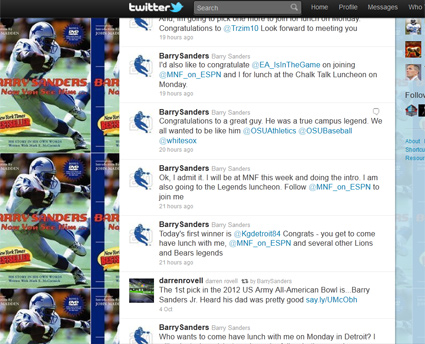 As you might recall Sanders was a beast under the lights on Monday Night. In his 10 MNF appearances during his illustrious career he rushed the ball 209 times for 973 yards and 5 touchdowns. Included in that total were five games with 100 yards or more. Sanders also added 20 receptions for 162 yards and a score to those impressive rushing totals.

I’m sure that if the introduction video is anything like Sanders’ play on the field during his 10-year career we will all be hyped, excited and most certainly ready for some football!