Blazing Trails on and off the Gridiron

Bobby Mitchell, as one of the most versatile offensive players ever to step onto a football field, was a head coach’s dream come true. Mitchell’s 11-year professional football career was defined by his 14,078 total net yards. The 6-0, 190-pounder possessed lightning quickness and always ready to strike. Speed, along with his ability to make tacklers miss, made him a scoring threat every time he touched the ball. He had the ability to score from anywhere on the field, which was exemplified by his 91 career touchdowns (65 receiving, 18 rushing, 3 punt returns, and 5 kickoffs returns). 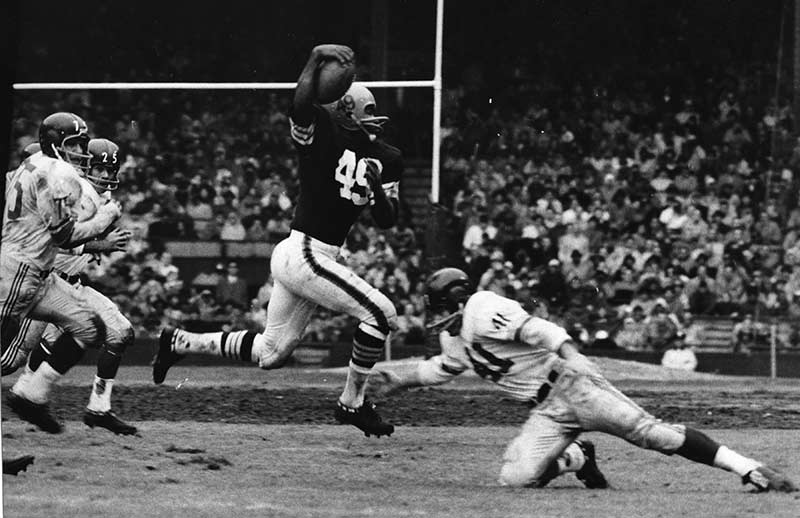 Mitchell’s excellence on the field is what earned him election to the Pro Football Hall of Fame. But, it was the character he learned from the game and displayed through the turbulent times of the 1960s that truly measured the success of his life.
Mitchell began his pro career as a halfback for the Cleveland Browns in 1958. Sharing the same backfield with Hall of Fame fullback Jim Brown, Mitchell’s elusiveness and speed made him a great change of pace from the bruising running style of Brown. A trade to the Washington Redskins, in 1962, changed Mitchell’s life forever. Sixteen seasons after Hall of Famers Bill Willis and Marion Motley reintegrated pro football with the Browns, in 1946, the Redskins and owner George Preston Marshall, under pressure from the league and the United States government became the last professional football team to integrate their roster. Mitchell was now in the spotlight of nation’s capital during a time of civil and social change. His character was tested daily, and over the next two years, Mitchell not only changed positions (from halfback to flanker), but also changed his lifestyle.

His ability to handle the daunting task of integrating an all-white organization, as well as find his place within a community full of turmoil defined his character. Washington D.C. was the hotbed of the civil rights movement during the 1960s. Mitchell’s high profile status thrust him to the top of the political and social scene. He would never be looked at as just a great athlete again. Mitchell’s courage and integrity showed through and he rose to the occasion. Soon after his arrival, Senator Bobby Kennedy reached out to Washington’s new star and the two became extremely close friends. He and Kennedy became the political one-two punch, that Mitchell and Brown had been on the field in his early years in Cleveland. Kennedy often called upon his friend to speak at political and social events throughout the country. Mitchell became a very important figure to our country during a time of great divide. His commitment, passion, and undeniable mental toughness became a model for the civil rights movement and its cause.

On the field, Mitchell’s move from halfback to flanker proved successful. In 1962, Mitchell led the league in receptions (72), and receiving yards (1,384). The following season Mitchell caught 69 passes for a league-leading 1,436 yards. That year he also tied an NFL-record against his former team when he caught a pass from quarterback George Izo and sprinted 99-yards for a touchdown. The next four seasons saw more of the same from the Redskins’ All-Pro flanker as continued to put up impressive numbers until his retirement in 1969. Mitchell retired from the NFL with an impressive 521 catches for 7,953 receiving yards; 2,735 rushing yards; totaled 3,389 punt and kickoff return yards; and scored 546 points.
Immediately following his retirement from the playing field, Mitchell continued to break barriers as he pursued his dream of becoming the first African American general manager. Washington hired him in 1970 as a personnel scout under first-year head coach Vince Lombardi. While there were many times Mitchell thought about walking away, it was Lombardi who encouraged him to persevere. After 34 years in the Redskins’ front office, Mitchell retired in 2003 with the title of assistant general manager. Although Mitchell never reached his end goal, like Coach Lombardi always said, “perfection is not attainable, but if we chase perfection we can catch excellence.” I’d say Mitchell was certainly excellent on and off the field.