No Limits on Legacy

The 2017 National Football League Draft begins on Thursday night and for each club it is an opportunity to infuse their roster with young talent. Fans need to understand that these young men are far from being finished products both on and off the field. In some cases, players drafted this year might not be certain that professional football is their calling. Such was the case surrounding Gold Jacket Curtis Martin on his draft day in 1995.

Raised in one of the roughest sections of Pittsburgh, Martin had to rise above the difficulties of a traumatic and challenging upbringing to fulfill a dream that many of his friends and family would never get the opportunity to achieve.

“I know God saved me so many times,” Martin explained about his childhood. “I don’t want to make it sound like Vietnam or anything, but I have seen a lot of people killed. A lot of my friends and family members have been killed. I just thank God I didn’t end up that way.”

Martin didn’t suit up to play organized football until his senior year at Allderdice High School. He exploded onto the scene and earned All-State honors, was named City League Player of the Year and had colleges knocking on his door to recruit him. Martin realized at that point not to put limits on where his talent could take him.

Though Martin had options, he decided to stay close to home and play running back for the University of Pittsburgh. He seemed to be on a fast track to the NFL following two seasons of steady improvement with the Panthers. Martin gained national attention with a breakout junior campaign rushing for 1,075 yards and scoring eight total touchdowns.

Amid whispers of Martin being a Heisman Trophy candidate he returned for his senior season. Those whispers became screams following his 251-yard rushing performance to open the season against the University of Texas. Unfortunately, the hype fell silent when Martin severely sprained his ankle ending his senior year in just the second game of the season.

Martin had a decision to make, heed the advice of Pitt head coach Johnny Majors and apply for a fifth year of college eligibility or became eligible for the 1995 NFL Draft. He bet on his talent and decided to see where it could take him. Determined to prove he was healthy, Martin performed well during postseason college all-star games and pre-draft workouts.

The 5-11, 207-pound running caught the attention of New England Patriots and Hall of Fame head coach Bill Parcells, who likened Martin to a back, Joe Morris, who he had with the New York Giants. With the 74th pick overall (a third-round selection acquired from the Philadelphia Eagles) Parcells made Martin the eighth running back off the board. The media criticized the pick and worried that durability would be an issue for Martin.

However, following the selection, Martin was more concerned with his love for the game than making the Patriots roster. He turned to his friends and family and said, “I just don’t want to play football. I don’t like it enough.” Luckily for football fans everywhere, Martin’s mentor, Pastor Leroy Joseph, explained to him that maybe football was just the vehicle he had been blessed with to reach other people. From that moment on, Martin committed himself to the game. “I was more determined, more focused…worked hard…because I always viewed football as my vehicle to reach people and impact their lives in a positive way.”

Martin’s impact on the field was immediate. He ran 30 yards on his first NFL carry, scored the game-winning touchdown and became the first Patriots player to rush for 100 yards in his pro debut. Martin amassed nine 100-yard games that season and finished the year as the AFC’s leading rusher with 1,487 yards and scored 14 touchdowns. He was named the NFL’s Rookie of the Year, All-AFC and voted to his first of five Pro Bowls. Martin played in a total of 168 games during his 11-year career, three in New England and eight with the New York Jets, and led his team in rushing in each of those seasons.

While Martin ran his way to Canton on the field, the values of commitment, integrity, courage, respect and excellence he developed by playing the game, have helped him impact people’s lives off it. And that is what will define his legacy as a man for all time. 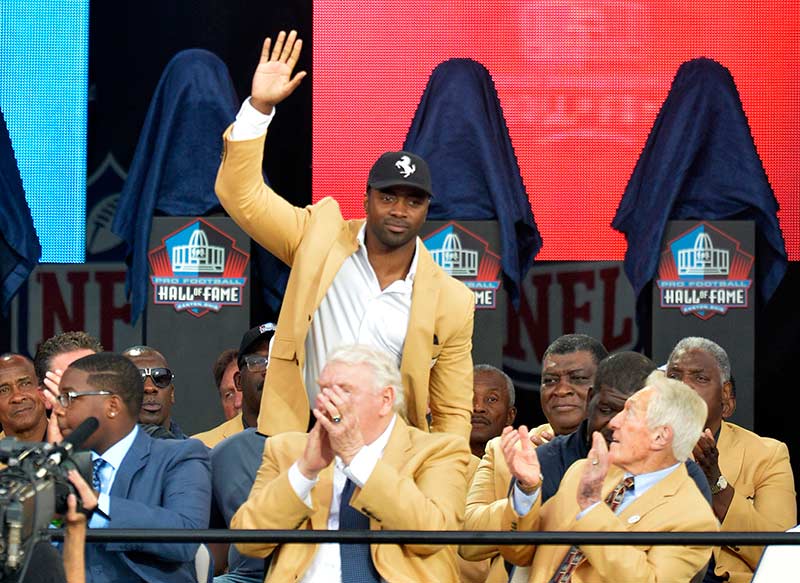 Every person whose name is called in this year’s NFL draft is playing the game for different reasons. Individually, each has their own set of personal goals and aspirations. However, if they are willing to sacrifice a little of themselves for the greater good of the team, while giving themselves completely to the Game. The Game will give them back the tools to build a legacy that has no limits.