Camping in Comfort in Green Bay

As the dog days of summer approach, the thoughts of fall begin to invade the hot July and August air once again. Every NFL club shares a feeling of hope as the offseason work comes to completion. Each has a renewed sense of confidence as training camps begin over the next few weeks. 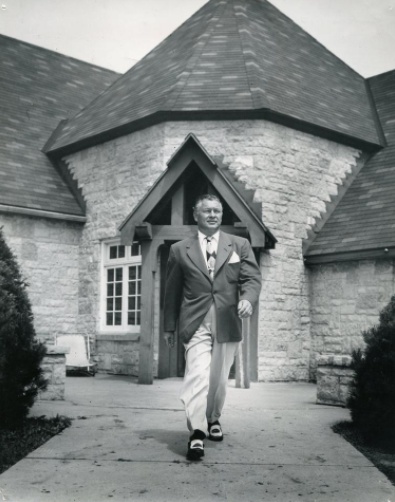 The ultimate goal is a Super Bowl championship. The path to that goal begins at training camp.

In 1926, the New York Giants became the first team to take their training camp on the road when they spent two weeks in Lake Ariel, Pennsylvania. Two decades later, future Hall of Famer Earl “Curly” Lambeau of the Green Bay Packers expanded on that idea when, in 1946, he convinced the team’s executive committee to purchase the Rockwood Lodge.

The 40-room stone retreat boasted 55-acres of land on the Green Bay peninsula about 15 miles north of the city and was bought for a mere $25,000. An additional $8,000 was spent on renovations to the main building and constructing prefab housing intended for married players and their families. The Rockwood Lodge became the NFL’s most elaborate franchise headquarter and team training facility.

It may be commonplace today, but as William Fay of the Chicago Tribune Press Service explained on Aug. 14, 1946; “There’s never been anything quite like this Packers training camp at Rockwood Lodge.” Fay added, “It’s downright domestic.”

To other NFL franchises, Lambeau’s idea was visionary, and that’s exactly how he portrayed it to the media. “The Packers bought Rockwood recently to provide an all-season home for the players and their families. We have two chefs. It’s a community training table. We have no housing troubles. We’ve eliminated all disciplinary and policy problems. The players will always be available for practice and meetings. Frankly, I don’t believe our setup can be matched by any professional or college team in the country.”

Rockwood Lodge offered the Packers a great location to build character and camaraderie, promoting a family atmosphere with community meals and leisure activities during off hours. Unfortunately, the reality wasn’t as rosy as the picture was painted. Many looked at the new facility as a way for Lambeau to exert more control over the team, keeping the club from the prying eyes of the Packers executives. Fans, who were used to socializing with players downtown, struggled to find that personal connection with the team. However, the team’s biggest issue laid more with the talent on the club and physical conditioning of the players due to the practice field.

The practice fields were placed in areas with only a thin layer of topsoil and grass above layers upon layers of hard limestone. By the middle of camp, players complained of weary-legs, shin-splints and other nagging injuries. Players began referring to the field as the “shin-splint special” or simply “The Rock.” It got so bad the team actually began busing back to Green Bay for practices as the season approached.

Many of the issues surrounding Rockwood may have been forgotten had the Packers come out and earned a Western Division title in 1946. But after a disappointing 30-7 home-opening loss to the Chicago Bears on Sept. 29, 1946, Lambeau’s Packers never recovered and finished third in the division that season and again in 1947.

In 1948 and ’49, the team sunk even lower and finished with the two worst records in franchise history at 3-9 and 2-10 respectively. Lambeau’s final chapter with the Packers began on Jan. 25, 1950 in a stunning event which seemed to prophesize the Packers legend’s fate. A rare January thunderstorm with lightning, high winds and sleet rolled through the Green Bay peninsula. A fire stared at the Rockwood Lodge and in a matter of hours, burned the Packers’ training facility to the ground. Five days later with his vision destroyed, Lambeau submitted his resignation more than 30 years after he founded the franchise.

Now, almost seven decades later, NFL clubs are not only embracing Lambeau’s idea, they are expanding on it to create some of the most magnificent developments in the country. Franchises are investing in communities to build huge complexes featuring not only team headquarters and training facilities, but the stadiums, halls of fame, retail shops, restaurants and hotels that enhance the fans experience. These investments are creating entire villages centered around the great game of football.