Tricky Trades; An Even Swap?

Northeast Ohio is still buzzing over the National Basketball Association trade that sent Kyrie Irving from the Cleveland Cavaliers to the Boston Celtics. Trades are part of the business side of any professional sports league and throughout its 97-year history the National Football League has experienced its share of blockbuster deals.

One example, the Herschel Walker trade in 1989, remains the largest trade in NFL history based on number of players or draft choices involved. Although the deal sent shockwaves through the Dallas Cowboys locker room and initially received negative criticism from the media, for Cowboys Owner and Hall of Famer Jerry Jones, the trade provided a nest-egg of talent. The deal catapulted the Cowboys’ turnaround from a 1-15 mark in 1989 to three Super Bowls in a four-year period in the early-to-mid 1990s.

While Jones rebuilt his franchise with the assets received by trading Walker, sometimes a player with elite athleticism, physical and mental toughness, and competitive drive to win is worth trading nearly an entire team to get. In 1952, California All-American and future Pro Football Hall of Famer Les Richter was drafted with the second pick overall by the New York Yanks. Two days after the draft, the team folded. Five months later, the Dallas Texans, who received the rights to Richter, dealt him to the Los Angeles Rams in exchange for 11 players. Head coach Joe Stydahar was ecstatic when owner Dan Reeves made the announcement that the team had acquired the hometown guard-linebacker. 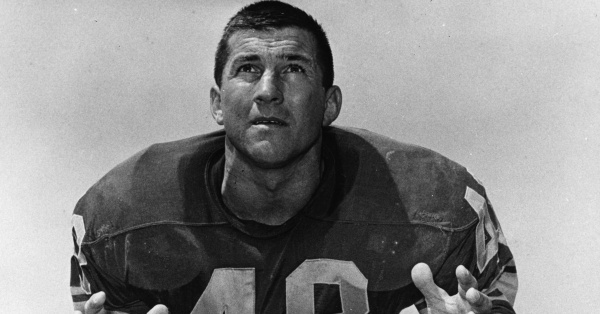 "We regretted giving up many of the boys," said Stydahar. "I feel they will be a definite help to Dallas. However, the Rams have always regarded Richter as one of the country's greatest football players and we're sure he'll be a tremendous help to us."

Richter, after serving two years of military service in Korea as an Army lieutenant, made his Rams debut on Sept. 25, 1954 against the Baltimore Colts. A versatile athlete, he played on both the offensive and defensive units. He also connected on one field goal and four extra points as he handled the place-kicking duties during the 48-0 victory over the Colts. Richter continued his consistent play throughout the season and finished his rookie year as the team's second-leading scorer with 62 points on 38 extra points (38-38) and eight field goals (8-15). He also added an interception on defense which he returned for a 24-yard gain. For his efforts Richter was selected to the first of eight consecutive Pro Bowls (1955-1962).

The following season Richter continued to develop as a player and for the first of two consecutive years (1955-56) he led the team in scoring when he connected on 31-32 extra points and added 13 field goals (which tied the Rams all-time record at the time) for a total of 69 points. L.A. won their final three games in '55 to finish at 8-3-1 as Richter made good on his final seven field goal attempts of the regular season including a 26-yard game-winner against the Philadelphia Eagles with seven seconds remaining. His kick helped the Rams finish one spot ahead of the Chicago Bears in the Western Conference.

Perhaps his biggest growth came on the defensive side of the ball. His toughness made him a wall against the run while his intelligence and aggressiveness helped him become one of the undisputed leaders in the Rams' locker room. Richter attributed his success to desire.

"Desire is 80% of the game," he said, "Everybody has the ability or they wouldn't be out there. It is the one with the desire who gets the most out of it."

Richter's desire was unquestioned and unfortunately it translated too many of his opponents viewing his aggressiveness as outside the limits of the rules. He never let the label of "a dirty player" change the way he approached the game. He once explained that, "the football field is no place for sentiment. I'm not sure my own grandmother would be safe if she made the mistake of wearing a uniform of the wrong color."

The Rams, for nine seasons, reaped the benefit of Richter's tenacity. He was the bedrock for which the Rams were built upon. During his 112-game career he fought through a fractured cheekbone, busted ribs, a broken hand and toe, a trick knee as well as more lacerations, bruises and aches to count. Through it all he never missed a single game and played at any position the team needed filled, middle linebacker, guard, center, or placekicker. His athletic ability and strong sense of determination allowed him to do it all.

Richter was named the Rams' Most Valuable Player three times (1956, 1957 and 1960). As for the eleven players the Rams swapped for Richter, fullback Dick Hoerner and defensive back/end Tom Keane were the headline names. Hoerner, L.A.'s all-time leading rusher at the time, played just one more season in the league. Keane, a four-year veteran, reached the peak of his NFL career and amassed 32 interceptions in his four seasons after the trade. The rest struggled to make or never made an impact at all in the NFL. Billy Baggett (HB) and Joe Reid (C) ended their NFL careers following just one season with the Texans in 1952. Dick McKissack (FB) played just one game with Dallas, while Dave Anderson (RB), Jack Halliday (T), Aubrey Phillips (C), George Sims (DB), Vic Vasicek (LB) and Richard Wilkins (E) decided not to continue their NFL careers.

Even at the end of his career, Richter played with the passion of a rookie. Head coach Bob Waterfield responded to a question about whether his aging star was slowed up and hurting the defense.

"Slow up? Hurting us? Let me tell you, I hate to think how bad we would be without Richter. If I had 36 like him, I would laugh at the rest of the league!"