Let Me Catch My Breath

Many great stories have been generated by the games, players and moments that have shaped pro football’s history. However, every fan should understand — like your father’s famous fishing story — there has been some fiction mixed in with the facts throughout the years. Luckily, when the tale gets too tall, the Pro Football Hall of Fame’s collection of more than 40 million pages of documents and six million photographic images can come save the day. Through meticulous research in the Ralph Wilson, Jr. Pro Football Research and Preservation Center, historians can add the facts back into the story so the truth can be known.

Rules research can be a very tricky thing. It is very time-consuming process and subtle changes in language throughout the years can make it difficult to follow the chronology of a certain rule. This year’s “Official Playing Rules of the National Football League” book is nearly 100 pages long. While the most passionate fans of this great game might know a good portion of the guidelines, most probably don’t know the origins of why those rules were created and the characters who made the game what it is today.

For example, Rule 4, Section 5 Article 3; Injury Timeouts Prior To Two-Minute Warning of Either Half — or some might know it as the “George Halas Rule” — has a wonderful story dating back further than many know. Now that so many teams run some form of the no-huddle offense throughout a game, it seems defenses are constantly getting worn down in the fourth quarter. It’s logical to think many of those defenders, especially the big defensive tackles, might begin to think about not getting off the ground after a play. That act would thereby stop the clock because of an injury timeout, and give the defenders a chance to rest.

Some may even remember back to the 1988 AFC playoffs when Seattle Seahawks’ nose tackles Joe Nash and Ken Clarke took to faking injuries to slow down the Cincinnati Bengals’ potent no-huddle attack.

That was minor compared to what George Halas and the Chicago Bears pulled in the final two minutes of three consecutive games during the 1938 regular season. The legendary Hall of Fame player, coach and owner and his team limped their way through those games to slow down their opponents and try to pull out the victories. 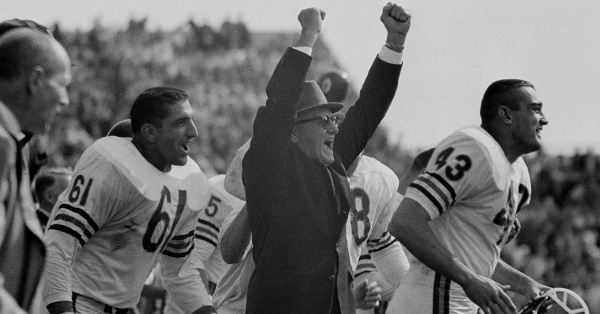 During the combined six minutes of play, which took nearly an hour to complete, 27 Bears players were injured and needed help off the field. The most interesting thing about all the injuries was that considering how frequently they were occurring there always seemed to be a sub warmed up and ready to come into the ballgame.

Chicago’s tactics may have caused more of a stir had they been able to win any one of those games. As it was though, the Bears lost to Cleveland 23-21, Detroit 13-7 and Green Bay 24-17. Halas’s tactic actually backfired during the game against Green Bay when two Bears players went down on the same play. The first player was physically fine, just playing his role to stop the clock. The other player, Hall of Fame guard Danny Fortmann, was actually hurt and in need of some medical attention. Unfortunately, the sub that was on the sideline warmed up and ready to check in had already reported into the game for the first Bears player, leaving Fortmann stuck in the game forced to play injured. Well, at least until the next play when he could take his turn as the next injured Bear.

Following the season, during a 1939 league meeting, the owners discussed the tactic at length and decided that any such strategy should be outlawed, which led directly to the creation of the “Halas Rule.” The rule reads a team is allowed one extra timeout for an injury during the final two minutes of either half. Teams using any additional injury timeouts are assessed a 5-yard penalty. Additionally, if the clock was running and the score is tied or the team in possession is losing, the ball cannot be put in play for at least 10 seconds on the fourth or more timeout. The half or game can end while those 10 seconds are run off on the clock, thus, eliminating teams from limping to the finish line.