Dick LeBeau has been involved in professional football for well over a half century as both a player and a coach. It was his success as a player that earned him a place in the Pro Football Hall of Fame as a member of the Class of 2010. The vast knowledge he gained through his experience and dedication to the game has been passed on to his players as a coach. LeBeau’s passion for coaching character ensures that the game’s history, traditions, and techniques will live on through future generations of pro football players and coaches. 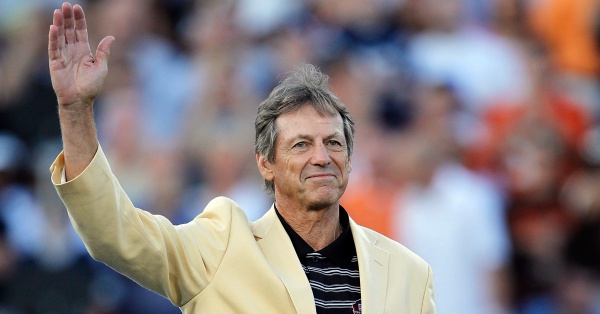 Playing under the tutelage of legendary head coach Woody Hayes at Ohio State, LeBeau was a key member of the Buckeyes’ 1957 National Championship team. Dick played quarterback as a freshman at Ohio State and though he threw the ball well, he was even better at running it. When he reported to the varsity squad, Coach Hayes moved him to halfback where he could be more effective in the open field. As a senior, LeBeau’s role changed once again and he found himself throwing around his 6-foot-1, 185-pound body as a blocking back for Don Clark.

LeBeau also displayed his toughness as a solid tackler in the defensive backfield throughout his college career. Unfortunately, Ohio State’s defense rarely played man-to-man coverage, something NFL teams would want him to do at the next level.

As a professional, nothing in LeBeau’s 14-year career came easy. But for the boy who grew up in London, Ohio cheering for the Cleveland Browns, it couldn’t have started any better. The Browns selected him in the fifth round (58th overall pick) of the 1959 NFL Draft. This was a fairly high pick considering the ’59 draft had 30 rounds. The Browns had just come off a 9-3 season in which they lost the Eastern Conference playoff game to the New York Giants 10-0. That defeat came after Hall of Fame head coach Paul Brown had led Cleveland to seven NFL Championship game appearances in eight years from 1950-57.

The Browns were not short on talent, but LeBeau was confident he could make Cleveland’s squad. While roster sizes were much smaller than they are today, with only 36 players on an active roster, LeBeau’s intelligence, speed, toughness and versatility made him an intriguing prospect. LeBeau received a great deal of playing time in the secondary during the preseason.

Although he acclimated himself well, he was waived by the team just days before the season opener. Unfortunately, players cut that late had a hard time finding open roster spots on other teams.

Obviously upset, LeBeau began searching for a place to play. He phoned his old friend from Ohio State, Detroit Lions halfback Howard “Hopalong” Cassidy, and asked if the Lions had openings at defensive back. “No chance here, we’re loaded.” Cassidy replied.

LeBeau set his sights on the Baltimore Colts. Although the Colts didn’t sign him to their roster, they did try convincing him to join their “taxi squad.” They invited Dick to join the team on the sideline for their home opener against the Lions. During warm-ups before the game, Cassidy spotted LeBeau on the field wearing street clothes and informed him that the Lions now had space on their roster and he should inquire about signing with them. Since he still hadn’t technically signed with Baltimore, LeBeau walked across the field and introduced himself to the Lions staff. Shortly after the meeting, Detroit inked him to a deal.

After spending the first six weeks on Detroit’s taxi squad, LeBeau was surprised when defensive coach Buster Ramsey informed him he would start at safety against the Pittsburgh Steelers on Nov. 8, 1959. The rookie played well and spent the final five games in the starting lineup and playing on special teams.

The next season, with an entire training camp under his belt, LeBeau won the Lions’ starting left cornerback position. He admittedly made many mistakes at first, but learned from each one, and made the most of his opportunity. He ended the season with four interceptions and began a streak of 12 seasons with three or more picks.

The following season LeBeau locked down the right cornerback spot. He remained at that position for the next 12 seasons. He started 171 consecutive games which was a Lions’ record at the time of his retirement in 1972. Shortly after walking off the football field for the final time as a player, LeBeau went right to coaching special teams for the Philadelphia Eagles. He may have ended his days in the NFL after one last season in 2017, at age 80, when he served as the defensive coordinator of the Tennessee Titans. His legacy is firmly cemented through him epitomizing the values of commitment, integrity, courage, respect and excellence.