Putting the “Special” in Teams

Every season, the National Football League provides fans close games, exciting plays and record-breaking performances. Many of which are aided by or are the result of special teams play.

In Week 12 of the 2011 season, the Arizona Cardinals faced their NFC West Division rival St. Louis Rams. The matchup ended as the first game in NFL history in which both teams scored touchdowns of 80-plus yards on punt returns. The Rams opened the scoring in the first quarter with Nick Miller’s 88-yard punt return touchdown. Not to be outdone, Arizona’s Patrick Peterson recorded an 80-yard punt return for a score in the third quarter as the Cardinals topped the Rams, 23-20. 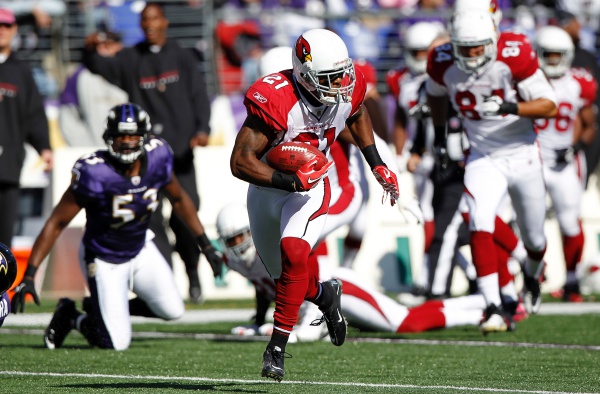 Since arriving on the NFL stage, Peterson has electrified fans with is extraordinary play on both defense and special teams. The Cardinals’ dynamic cornerback is the first player in NFL history to record four punt return touchdowns of at least 80 yards in a single season (89, 82, 99 and 80 yards in 2011).

Christiansen, the Detroit Lions’ Hall of Fame safety, returned four of his eight career punt-returns touchdowns during his first NFL season. Amazingly, the 6-foot-1, 180-pound defensive back returned all four of his punt-return touchdowns in 1951 against just two teams in two games. The first two touchdowns of Christiansen’s career came during a 27-21 loss to the Los Angeles Rams on Oct. 14, 1951. The previously unbeaten (2-0) Lions struggled most of the day against the (1-1) Rams, but their lone bright spot was Christiansen’s play in the return game when he returned two punts for points.

The first came with the Lions trailing 10-7 in the second quarter, when Christiansen took a Glenn Davis punt 67 yards to put Detroit up 14-10. The second came as the Lions tried to battle back from a 27-14 deficit in the fourth quarter. Jack once again streaked into the end zone this time on a 48-yard punt return, which gave the Detroit life until the game’s final whistle.

Christiansen established his mark as a returner against the Green Bay Packers on Nov. 22, 1951. The Lions at 5-2-1 were fighting to keep pace with the Chicago Bears and the Rams in the NFL’s National Conference. The Packers jumped out to an early 21-10 lead on Thanksgiving Day. Hall of Fame quarterback Bobby Layne then threw Detroit back into the game with three of his four TD passes coming in the second quarter, which had the Lions up 31-21 at halftime.

The second half opened with a long touchdown run by Bob Hoernschemeyer. Then a few minutes later Christiansen put the proverbial nail in the coffin when he retrieved a Green Bay punt and raced 71 yards to the end zone. The stunned Packers tried to regroup, but Christiansen finished Detroit’s scoring with a spectacular 89-yard punt return TD, weaving around and through Green Bay defenders to seal the 52-35 Lions victory.

Christiansen, when not putting on a show as a punt returner, anchored the Lions’ famed secondary. He intercepted 46 passes in his career, returning three for TDs.

His legacy on the gridiron was firmly cemented with his election to the Pro Football Hall of Fame in 1970.