Thomas was the Sack Master

Hall of Fame linebacker Derrick Thomas amassed 126.5 quarterback sacks during his 11-season career. The bulk of them, 116.5 or 92 percent, were collected during the decade of the 1990s. No player tallied more sacks during that ten-year span than Thomas. He was a sack machine and his ability to rush the quarterback allowed him to completely take over games. 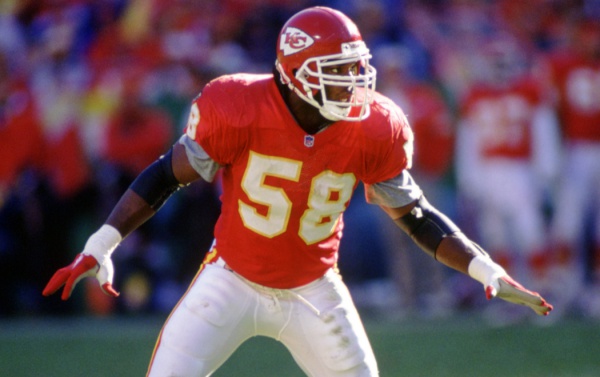 Generally, when a quarterback got hit by Thomas, it wasn’t the first nor was it the last time during the game. He logged 27 multi-sack games during his career that accounted for 73 or 58 percent of his career sacks.

Thomas also dominated division opponents. He recorded 14 of his 27 multi-sack games against the Oakland/Los Angeles Raiders, Denver Broncos, San Diego Chargers and Seattle Seahawks. One of his most memorable games occurred in just his second National Football League season when the Kansas City Chiefs hosted the Seahawks at Arrowhead Stadium on Nov. 11, 1990.

Kansas City entered the game with a record of 5-3 against the 3-5 Seahawks in a tight AFC Western Division. The midseason battle was a defensive struggle with neither team’s offense able to assert themselves. However, one player on the field that day, decided to take matters into his own hands. Thomas’ rare abilities were on total display.

Thomas was ready to go from the opening kickoff. He recorded his first sack on Seattle’s first possession when he dropped Dave Krieg for a five-yard loss on third-and-20. The Seahawks didn’t fare any better on their next possession as Thomas continued to wreak havoc. He recorded his second sack of the game knocking Krieg back for a 14-yard loss.

The teams traded field goals on the following two possessions and with three seconds to go before halftime, Kansas City tacked on another three points, taking a 6-3 lead as the teams headed to the locker rooms. Two sacks in a game is a good day’s work for any defensive player, but Derrick wasn’t finished. In fact, he was just getting started.

When the third quarter kicked off, Thomas was ready to turn up the heat. Seattle scored quickly on a four-play drive that included a 54-yard touchdown pass and Kansas City’s offense was only able to respond with a field goal.

The Chiefs trailed 10-9 and looked to their defensive leader for support. In true Thomas fashion, he delivered. Not only did he produce his third sack of the game, he also stripped Krieg of the football, which was picked up by Kansas City in the end zone for a touchdown giving them a 16-10 lead.

As the final quarter began, the Chiefs held a one-point lead and Seattle was forced to throw the football to score quickly and stop the clock. This played right to Thomas’ strength. Over the Seahawks’ next three possessions, Thomas sacked Krieg four more times, which included three sacks in five plays. His game total of seven sacks set a new NFL single game sack record which still stands today.

Surprisingly, with just four seconds left and Seattle looking to score the go-ahead touchdown with one last play, Krieg somehow escaped the grasp of Thomas, who was looking for his eight and the game clinching sack, to throw a 25-yard touchdown pass to win the game 17-16. Krieg explained, “I’m glad they didn’t call me in-the-grasp, he had his hands around my hips. Fortunately, I just shook away from him.”

“I thought I had him, that last sack I didn’t get is the one I’m going to remember,” Thomas said recalling his record-setting game. Thomas, always a team player, would have certainly taken the win over the record. Despite the loss to Seattle, Thomas helped lead the Chiefs to an 11-5 record and a playoff berth that season. On his way, he collected a career-high and team-record 20 sacks.

Throughout his career, Thomas possessed a strong work ethic, great motor, lightning fast first step and superior athletic ability that he combined with a natural tenacity to get to the quarterback. Thomas’s impact on Kansas City’s defense was felt from the first time he put on a Chiefs jersey. The defense took shape around Thomas and his style of play. They attacked. They hit the quarterback. They forced fumbles. That is the true mark an impact player.