Evolution of the Game: Goal Posts

Indianapolis Colts kicker Adam Vinatieri recently broke Hall of Famer Morten Andersen’s record for most career field goals when he connected on his 566th three-pointer on September 30, 2018 (Week 4). Vinatieri is now setting his sights on becoming the National Football League’s all-time leading scorer. Following this past Sunday’s game against the New York Jets, he is just 10 points away from surpassing Andersen’s record of 2,544 points set in 2007.

Kicking has always played a major role in the sport of football (hence the name). There are three pieces of equipment needed to score points by kicking in football. You need a shoe (optional), a football and a goal post. The shoe and the football are self-explanatory. The goal post on the other hand needs a bit of clarification. That’s because the size, shape and positioning of the goal post on the field has changed throughout the years.

For example, former New Orleans Saints kicker Tom Dempsey’s NFL record 63-yard field goal in 1970 against the Detroit Lions may not have even been attempted had today’s rules applied. From where he kicked, the attempt would have actually been from 73 yards out. Conversely, the league’s other record holders in that category, Jason Elam of the Denver Broncos and Sebastian Janikowski of the Oakland Raiders, would have only been lined up for a 53-yarder back in 1970. So, here’s a bit of history about the goal post. 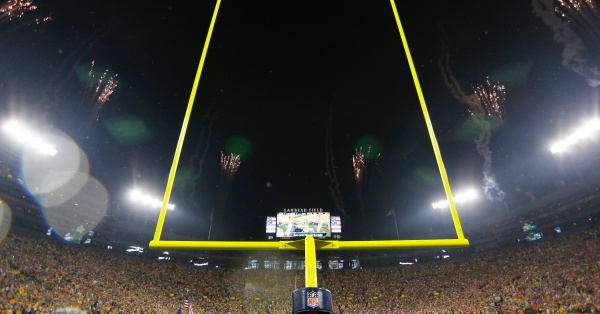 In 1892, when William “Pudge” Heffelfinger became the first known football player to be paid to play the game, the rule book stated, “In the middle of the lines forming the ends of the field, the goal-posts are erected, and should be 18 feet 6 inches apart, with a cross-bar 10 feet from the ground. The posts should project several feet above the cross-bar.” The structure and placement of the goal post in 1892 was directly taken from rugby.

During the NFL’s first season in 1920, the goal posts still were located on the goal line and remained the same size and shape. However, this changed in 1927 when the NCAA moved them back to the end line (in those days, the NFL aligned with the college rule book, so the league quickly followed suit). This however resulted in a reduction of field goals and an increase in tie games. The NFL finally created its own rule book in 1933 and moved the goal posts back to the goal line. Not surprisingly, field goals increased by two-fold and the number of tie games took a downturn.

Not much changed for the next 33 years until 1966 when a resolution was adopted by the NFL owners that required the goal posts to be offset from the goal line and should extend 20 feet in the air. The color of each goal post was also mandated to be bright gold. The next year the league made the decision to require a “sling-shot” type post, eliminating the two-post versions in the end zone which had become more and more of a safety concern.

Finally, in 1974, the league pushed the goal posts back to the end line. The change was made mostly to encourage offenses to score touchdowns rather than field goals. The three-pointer had become an increasingly common occurrence by 1973. The move achieved the league’s desired effect, field goals dropped from a total of 543 successful conversions off 861 attempts in 1973 to 335 field goals made on 553 attempts the following year. As Paul Brown told Sports Illustrated in 1974, “The whole end zone is open for pass patterns now; the goal posts were, in effect, another safety man when you got inside the 20. You couldn’t run or pass around them. And it was hard to punt or pass coming out of the end zone.”

Football has always been a game willing to change in order to grow. Whether it’s to make the game more exciting to watch for fans or make the game safer to play, football continues to evolve. And every step of the way, the Pro Football Hall of Fame vows, through its creed, to protect the game by making it safer, grow the game by promoting its values, and elevate the game by loving those who helped build it.