Thanksgiving and football are like ... well ... turkey and stuffing. Thanksgiving Day football, once a tradition among the high schools and colleges of America, has faded and given way to the professionals of the sport.

Two National Football League franchise cities, Detroit and Dallas, are where Thanksgiving Day football has become an expected way of life. Beginning in 1966, Dallas has missed playing on the holiday just twice, in 1975 and 1977.

The Lions tradition started back in 1934. It was the franchise’s first year in Detroit after a local radio executive, George A. Richards, had purchased the Portsmouth (Ohio) Spartans and moved the team to Detroit. The Spartans were members of the NFL from 1930-33. The Thanksgiving Day game between the Bears and the Lions became the first NFL game broadcast nationally, with Graham McNamee the announcer for NBC radio.

While there have been many great performances and NFL firsts that have occurred on Thanksgiving Day, none of them were more widely anticipated and had as much of an impact on the league as the pro debut of Harold “Red” Grange. 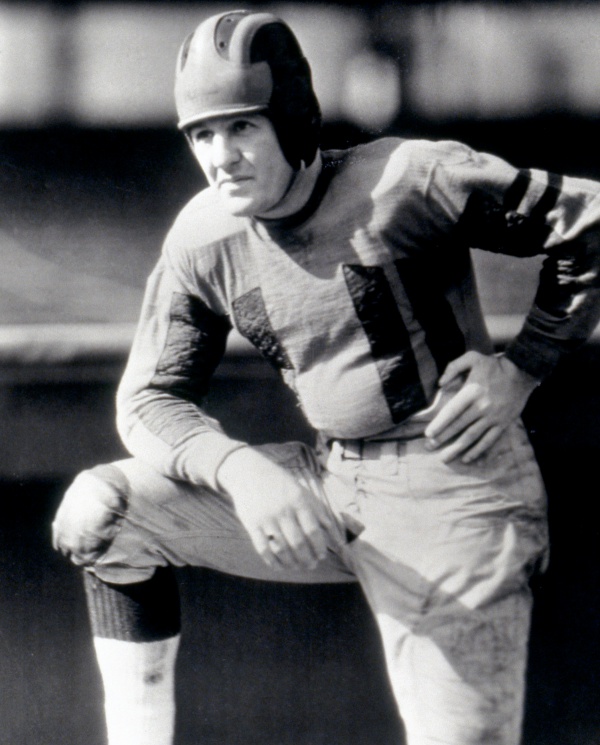 The NFL was in its infancy in 1925 and in desperate need of a major gate attraction. The league’s wishes were granted on Thanksgiving Day as the Chicago Bears introduced their newest member — “The Galloping Ghost.”

Just days after his collegiate career ended, a standing-room crowd of 36,000 — the largest in pro football history at the time — packed Wrigley Field to get a glimpse of Grange in action. Although the Bears and crosstown rival Chicago Cardinals played to 0-0 tie, the NFL had its first bona fide star.

Grange played respectably as the crowd, and the Cardinals, keyed on the famous player. In fact, the crowd booed whenever the play was not directed toward Grange. Aside from gaining a black eye, Grange totaled 92 yards from scrimmage, added 56 yards on punt returns, threw six passes and had an interception to break up the Cardinals’ only real scoring threat of the day. Newspapers reported that he pulled in an astronomical $12,000 for his day’s work — much of which most likely found its way to his manager, C.C. “Cash and Carry” Pyle.

Over the next several months, Grange and his Chicago Bears traveled the country on a barnstorming tour. More than 400,000 spectators from coast to coast saw the fabled All-American from the University of Illinois display his athletic talents on the football field.

Using Grange as his star attraction, Pyle organized a rival league called the American Football League in 1926. Grange starred for the New York Yankees. While the Yankees had moderate success, the league failed. Grange rejoined the Bears in 1927 but suffered a serious knee injury that sidelined him through the entire 1928 season. He came back in 1929 and played with the Bears through 1934.

In actuality, Grange was a far better defensive back than a ball carrier on offense. More importantly for the NFL, the name recognition of Red Grange was instrumental in attracting large crowds for the pro game. His signing with the Bears helped the league succeed and grow to a new level in the late 1920s and early 1930s.

The NFL has grown so much since that Thanksgiving Day in 1925. This Thursday, hundreds of thousands of fans will pack three stadiums, while millions more will watch the TV broadcasts from the comforts of their homes to continue the tradition of friends, family and football on Thanksgiving Day.