Thankful for the support

Joe DeLamielleure is walking to the Pro Football Hall of Fame’s Golden Anniversary Reunion. His Pounding the Pavement for Prosthetics Walk from Buffalo to Canton is to raise awareness and support for the GRACE’S LAMP organization that deals with young children who grow out of their prosthetic legs but cannot afford the high cost of new adult prosthetic legs. Read story>>> | Support Grace’s Lamp>>>

Today, I crossed paths with a guy by the name of Gregg Anderson who was in a wheelchair. He had his leg amputated and he’s been waiting nearly two years to get his prosthetic leg. Gregg was asking me what I was doing the walk for and was really amazed when I told him. Meeting Gregg gave me a boost during these long days as it reminds me how fortunate I am and exactly why I'm doing this. 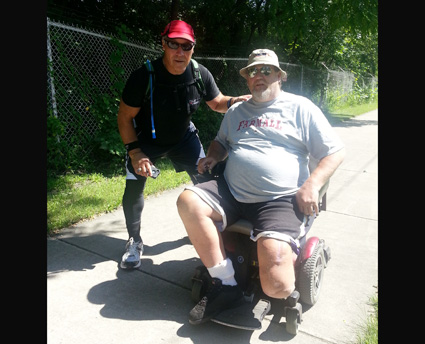 My walk has also allowed me to see the landscape of America. It’s like capturing America all at once. I was walking through Erie, Pa. and there were just some beautiful neighborhoods and then I continued through into the not so nice areas and saw some of the shutdown businesses.
Aside from having lots of time to think as I walk, I did some multi-tasking today as I worked out with my Joe D band for about an hour of my walk.

I continue to be so thankful for all of the support I’m getting. There’s not a day that goes by that I can’t think of how great it is to be in the Hall of Fame and be part of that group. Today, I got calls from Billy Shaw, Paul Krause, and Bobby Bell. Jack Youngblood called me last night also. It means a whole lot to me that these guys care so much and call to make sure I’m doing okay. It makes me feel good.
Well, this has been a real gut check. They are long days for sure. Tomorrow, I’m having a “light”day and will cover about 17 miles. We’re right on schedule and I expect to cross into Ohio sometime on Sunday.
I appreciate all the media coverage. Joey and I leaving Ralph Wilson Stadium was the No. 2 “Play of the Day” on ESPN the other day. And here are a couple of other stories on my walk from TV stations in Buffalo.
WGRZ (NBC-Buffalo)
WIVB (CBS-Buffalo)
Previous Next
Go back to all blog listings