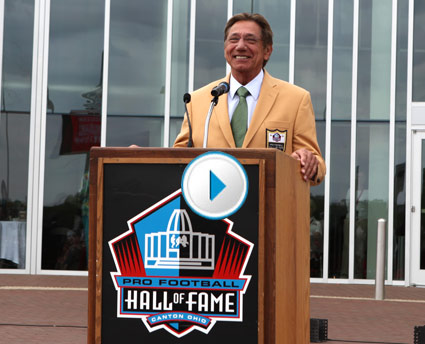 “Broadway Joe” also walked through the Hall on Friday, his 70th birthday. He was shooting a commercial for his Namath Cooker, a unique item manufactured in Stark County, the home of the Hall of Fame, that will go on sale soon. He also took time to place this year’s Vince Lombardi Trophy on display in our Lamar Hunt Super Bowl Gallery.


One thing was crystal clear watching Joe walk through the hallways of the Pro Football Hall of Fame last week.

It’s a slogan we have draped on the side of the Hall of Fame building and seeing the affect he had on fans at the Hall, it was quite evident we hit the mark with that wording.

Namath strolled by fans and greeted them all. He then would stop and chat and give the occasional hug or handshake to adoring fans who were noticeably stunned and star struck by seeing the legendary quarterback in person.

There was a man from Dayton whose hand was trembling as he attempted to take Namath’s photo on Saturday morning. Joe calmly handed the camera off to someone and invited the man and his daughter to pose with him.

Joe passed by a woman in our lobby. He first noticed she was dressed in a Jets’ #12 jersey but gazed down and saw she had an artificial leg. He stopped and spent the next several minutes chatting with the woman. He listened as she passionately described how she fell in love with the game because of him.

On Friday as Namath stood in front of the Hall of Fame’s new entrance taping the commercial, fans gathered to grab a glimpse. Awestruck looks filled each of their faces as the former Jets quarterback recited his lines in front of the camera. Then, as the cameras ran, one fan driving down the highway pulled over to the shoulder so she could get out and take a photo of Namath. 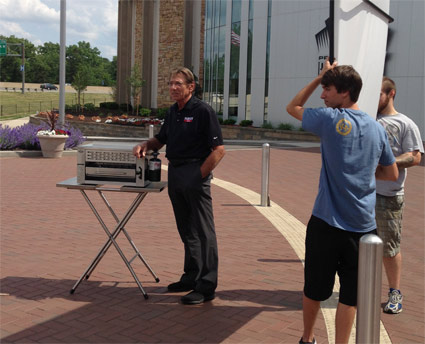 There were countless other encounters just like these that occurred during the two days Joe Namath spent in Canton last week.

Fans travel every year from all over the world to see Namath’s “second home.” And as they tour the exhibits they can relive the amazing performance of Namath in Super Bowl III and can also view his likeness through the bronze bust in our Hall of Fame Gallery.

But, it was an entirely different experience for those at the Hall of Fame last week when the “legend” walked among them.

Legends do live in Canton.


Previous Next
Go back to all blog listings